“I believe, still, that there’s always a point in fighting.”

(Statement by Simone Veil to Libération, 1995)

A key figure in French political history, Simone Veil has left her mark through her tireless commitment to the fight for women’s rights, almost alone in a world of men. Magistrate, politician, academician, feminist and convinced European, this icon of the 20th century showed courage and determination on all fronts, without ever wavering from her values. 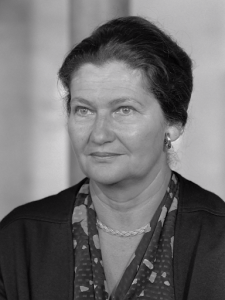 Simone Jacob was born in 1927 in a jewish family in Nice. She suffered from the progressive segregation of the anti-jewish laws and at 17 years old in the middle of Second World War, she was arrested by the Gestapo. The rest of her family members, hosted by friends from Nice, were also arrested and deported. They were quickly separated and sent to various concentration camps, namely Auschwitz and Bergen-Belsen.

Miraculously, Simone avoided the extermination camps thanks to a polish “kapo”, who transferred her in an annexe saying “You’re too pretty to die”. Simone and her two sisters, Madeleine and Denise would be the only survivors from the Jacob family.

When she was released, Simone Jacob started studying law and political sciences, before marrying Antoine Veil in 1946, future minister for the centrist party MRP. However, he expressed his opposition to Simone’s will for a career as a lawyer. Nevertheless, she aimed towards magistracy. She first worked in the prison administration where she introduced measures to improve the living conditions for prisoners. During the Algerian war, she succeeded in transferring to France Algerian women prisoners who had been raped and mistreated. With only 40% of French women working, and even fewer in Parisian bourgeois circles, Simone Veil’s professional career came as a surprise and was not universally appreciated.

A brilliant woman with a strong character, she became passionate about politics and joined the government in 1969 in the Ministry of Justice. She then became Minister of Health under Valéry Giscard d’Estaing in 1974, then held various ministerial posts until 1995. During the elections to the first European Parliament in 1979, she was elected in the colours of the Union pour la Démocratie Française (UDF), and became the first woman to preside over the new Parliament.

Simone Veil spent her last years in politics at the Constitutional Council until 2007, before gradually withdrawing from the public scene. 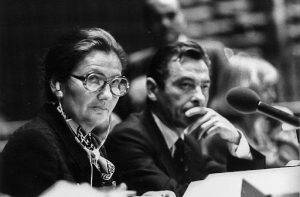 Simone Veil presiding over a session of the European Parliament in Strasbourg, 1979

Her fight for the cause of women

Throughout her career, Simone Veil put her convictions before the political labels or customs of her time. Thus, in 1974, she presented her bill on voluntary termination of pregnancy to the National Assembly, which decriminalised abortion. In front of several hundred parliamentarians who were opposed to the bill, she declared in a speech that will remain in history: “First of all, I would like to share with you a woman’s conviction. I apologise for doing so in front of this all-male assembly. No woman willingly has an abortion. You only have to listen to them: it is always a tragedy, it will always be a tragedy. The Minister of Health has just generated 25 hours of debate during which the opponents of her project showed extreme violence against her, going so far as to broadcast in the hemicycle the heartbeat of a foetus or reproach her, a survivor of the camps, with “choosing genocide”. The text, known as the Veil Law, was finally adopted on 17 January 1975.

During her years at the head of the Ministry of Health under various governments, Simone Veil also succeeded in having the contraceptive pill reimbursed by the Social Security system, in introducing financial aid for mothers of young children, and in granting two years’ unpaid leave after childbirth.

Memory of the camps

In addition to her fight for gender equality, Simone Veil fought throughout her life so that the memory of the concentration camps would live on for future generations. This duty of remembrance led her to chair the Foundation for the Memory of the Shoah from 2000 to 2007.

In 1992, while she was a Member of the European Parliament, she denounced the camps in Bosnia during the Balkan war. She was in favour of a strong intervention and protested against the attitude of certain leaders whom she considered passive: “We cannot hide behind the political solution […]. I don’t want to hear again what I heard fifty years ago”. 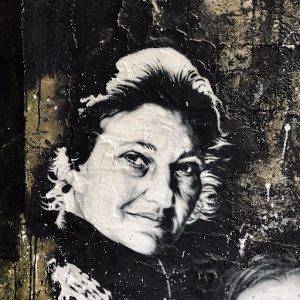 Simone Veil devoted much of her political life to Europe, which she believed to be the only guarantee of peace for the continent. She moved to Germany with her husband Antoine while he was studying there, only a few years after the Holocaust. A convinced promoter of Franco-German reconciliation, she argued in the face of her reluctant entourage that it was necessary to make a distinction between the Nazis responsible for the horrors and the German people as a whole. She does not hesitate to speak out against the theory of the trivialisation of evil and collective responsibility put forward by the philosopher Hannah Arendt, which she claims is a “convenient sleight of hand”, in which “everyone is guilty, so no one is” (Une Vie, 2007).

While pointing out the difficulties of the project, she worked for the European construction during her presidency in the Parliament. Despite the low level of the Parliament’s powers at the beginning, Simone Veil gave it more visibility in the field of human rights. In particular, she supported the development by Yvette Roudy of the Committee on Women’s Rights and Gender Equality in 1979, wishing to bring feminism to the European level.

She was keen to work for peace and to see her projects through to the end, and did not hesitate to cross political divides, sometimes voting left and sometimes right, both in the European Parliament and in the French elections. In 1983, together with her husband, she created the Club Vauban, a think tank that transcends political labels.

The journalist Michèle Cotta said in 2017 about Simone Veil: “She found the courage to move to Germany with her husband after leaving the camps, she also had the courage to be a convinced European”.

Simone Veil became a member of the French Academy in 2010 and had her Auschwitz-Birkenau number engraved on her sword of Immortality. She now rests in the Panthéon alongside her husband Antoine, following a decision by Emmanuel Macron who paid her a national tribute on July 1st 2018.

Her autobiography “Une Vie” (A Life) published in 2007, is a poignant and personal testimony, the embodiment of a rebellious and determined feminist.