We live in a society of clicks. One piece of information chases another, some of them shocking and striking, making the headlines for several weeks, like the war of invasion that Russia is currently waging against Ukraine. Others are less fortunate and get little or no coverage in the Western media. However, the 21st century has many conflicts which deserve as much consideration as any other.

The war in Syria has been at the core of the news for several years now, especially because Europeans felt directly impacted with the arrival of millions of Syrian refugees, with its peak being in 2015. We know the main lines of the conflict, its origin: the repressive regime of Bashar Al-Assad; the failed revolution of the Syrian people, especially its youngsters in 2011 for more democracy and freedom; but also, at the same time, the rise of the Islamic State and its entry as a belligerent in the conflict. We also know the war crimes committed by the regime and its allies like Putin’s Russia: the bombing of cities, the use of chemical weapons, the use of rape as a weapon of war, etc.

Other events, though no less tragic, do not get a right to the front page or to a special program. They end up in a paragraph at the end of an article or are completely omitted from the chronology of history. This is the case of the siege of the Yarmouk camp. It could have been totally forgotten, never mentioned in the key dates and events of the war in Syria. Abdallah Al-Khatib refused this fatality by presenting Little Palestine. Diary of a siege. It is a 90-minute documentary film made from five hundred hours of rushes showing the daily life of the inhabitants during this siege, showing us a forgotten reality difficult to imagine for us.

Yarmouk (اليرموك) is located 8 kilometres south of Damascus in Syria. This Palestinian refugee camp was built in 1957. The camp quickly became a neighbourhood, and then a city, where Palestinian and Syrian families were living together. At the beginning of the 21st century, the city had four hospitals and several schools, including twenty elementary schools managed by UNRWA (United Nations Relief and Works Agency for Palestine Refugees in the Near East). In June 2002, 112,550 refugees were registered in Yarmouk. Until the beginning of the civil war, it was the largest Palestinian refugee camp in the world.

The town was not officially recognized as a refugee camp, although the signs said “Mukhayyam al-Yarmouk”, meaning “Yarmouk camp”. Yarmouk was far from the image one might have of a refugee camp. Indeed, in an article, the BBC states that there are “there are no tents or slums in sight. It is a residential area with beauty salons and internet cafés”1.

Life in the siege

After the outbreak of the Revolution in 2011, a significant number of the one hundred and sixty thousand inhabitants of Yarmouk participated in the demonstrations against the government of Bashar Al-Assad. This strong mobilization would be used as a cover by the Syrian government to bomb the city. Hence, the latter has been the scene of clashes between the Syrian Liberation Army and the armed forces of the Syrian government since 2012. The city was under siege between 2013 and 2015 (like other cities in the suburbs of Damascus, including Daraya or Ghouta). Gradually, the city was emptied of its inhabitants, and in 2014, the population stood at 20,000 people. During this siege, 181 people died of hunger. 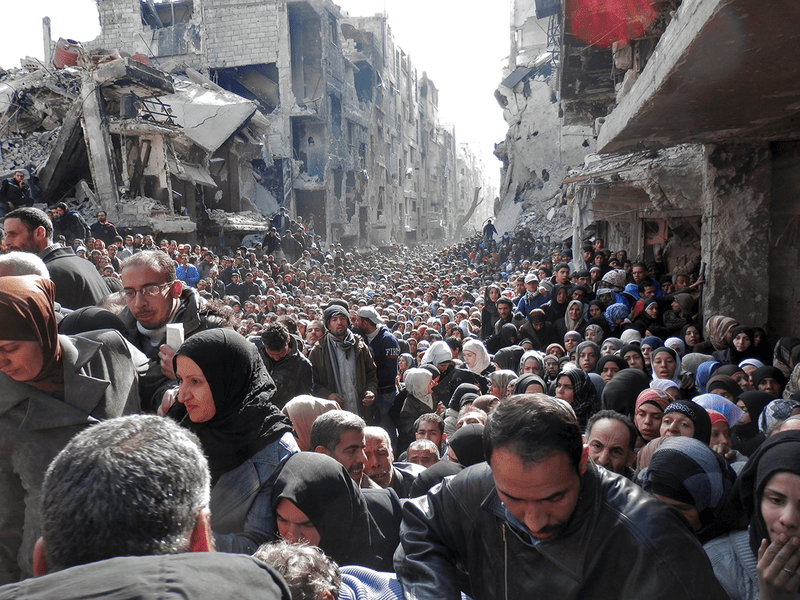 Abdallah Al-Khatib, 23 years old, borrows a camera from a friend and begins to film life during the siege to bear witness of the situation and the famine organized by the Syrian government. For two years, he accumulated images, interviews, visits, alongside his mother, a nurse in the camp. Through his camera, we discover their daily life, the difficulties to find food, medicines, but also the resistance and the hope of the inhabitants. Little Palestine tells the story of the daily struggle of a people defending these two square kilometres of land and the right to live in a community. This documentary also shows the life paths of people who left Palestine in 1948 when Israel was created and who find themselves, more than sixty years later, still under the bombs and in a besieged city.

The end of the siege

In April 2015, Islamic State groups defeated the Syrian Liberation Army and took over much of the city. After a few days, the Popular Front for the Liberation of Palestine-General Command (PFLP-GC) militias and other Palestinian militias retake some areas of the city. In 2017-2018, the Syrian government began a counter-offensive and on 19 May 2018, the Syrian government regained full control of the city. After six years of fighting, the Yarmouk neighbourhood is completely ruined. In 2017, it was estimated that there were about 6,000 inhabitants left in the camp.

When discovering Little Palestine, one inevitably thinks of Pour Sama by Waad al-Kateab and Edward Watts, released in 2019, which is a documentary about daily life in Aleppo during this same war. These two films are very complementary and allow us to understand how these people have organized themselves to live and survive in a war-torn country. These films are important. For history, for memory, not to forget, to condemn and to hope not to repeat.

Little Palestine, Diary of a Siege, realized by Abdallah Al-Khatib, 2021.