“The true birthplace is that wherein for the first time one looks intelligently upon oneself; my first homelands have been books.”

Being an emblematic figure of French literature and feminism, Marguerite Yourcenar wrote in With open eyes: Conversations with Matthieu Galey (original title: Les yeux ouverts: Entretiens avec Matthieu Galey) (1980): “A touch of madness is, I think, almost always necessary for constructing a destiny.” Hers was extraordinary: woman of letter, writer, poet and academician all at once, Marguerite Yourcenar embedded woman’s plurality. But she was also definitely modern with asserted convictions and at ease with an affirmed bisexuality. 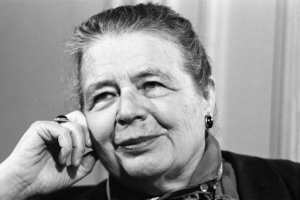 Marguerite Antoinette Jeanne Marie Ghislaine Cleenewerck de Crayencour, known under the pseudonym of Marguerite Yourcenar, is a French author, poet and literary critic. She was born on the 8th June 1903 in Brussels from a French father and a Belgian mother deceased shortly after her birth. She was therefore raised by her father, a traveller who initiated her to a cosmopolitan life. Even though she never went to school due to her numerous trips, she obtained her baccalaureate – secondary school diploma – in Aix-en-Provence.

Her youth and first steps into literature

After getting her diploma in 1921 at 18 years old, Marguerite Yourcenar took up poetic writing. In 1921, she published her first poem named “Le Jardin des Chimères” (“The Garden of Pipe Dreams”) under the pseudonym Marg Yourcenar. Yourcenar, anagram of Crayencour eliminating a C, is the pseudonym that she gave herself with the help and the permission of her father, which would become her legal surname in 1947 when she obtained American citizenship. Following her first poem, she published in the ensuing year a poetry volume named  “Les Dieux ne sont pas morts” (The Gods are not dead – 1922).

Following her father’s death, in 1929, Marguerite Yourcenar dedicated herself entirely to literature and published her first epistolary novel. Entitled Alexis (original title: Alexis ou le traité du vain combat), the book reveals the meticulous and refined style of the author imbued with great classicism. The book counts the story of a famous musician who confesses to his wife his homosexuality and his desire to end their marriage.

In 1936 and following a romantic disappointment from a man who didn’t love her, Marguerite Yourcenar published Fires (original title: Feux) in 1936, a sequel in lyrical prose. Afterwards, she produced Oriental Tales (original title: Nouvelles Orientales) in 1938 and Coup de Grâce (original title: Le coup de grâce) in 1939. Being a translator as well, Marguerite Yourcenar translated numerous literary works and american gospel, which can be seen in Fleuve profond, sombre rivière (“Deep river, obscure river”) (1964), a collection inspired by sacred themes and personal matters. 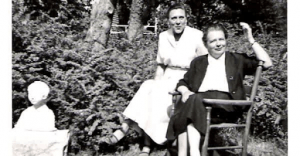 At the end of the war, Marguerite Yourcenar left for the United States to join her partner Grace Frick, a professor of literature. Grace Frick gave up on her university career, supported Marguerite Yourcenar financially and psychologically during the war and became the English translator of her work. By 1950, they moved to Mount Desert Island in Maine, a place they discovered together back in 1942. She received American nationality in 1947 and taught French literature and art history until 1953. The two women lived together until Frick’s death, from breast cancer, in 1979.

The author would thus alternate between times of isolation on her island and long periods of traveling which fed her inspiration. Sexuality and painful romantic relationships are recurring themes in her work, which can be explained by her own bisexuality. In 1951, she published Memoirs d‘Adrien, a novel imbued with strong humanism. The author, blessed with fluent knowledge in ancient Greek and Latin, had wide acquaintances of ancient literature. Moreover, to support her writing, she gathered exhaustive documentation and read all the retained literature from Hadrien’s era. Being an absolute success worldwide, Memoirs of Hadrien were rewarded by the Prix Femina-Vacaresco, then by the French Academy in 1952. Awarded as well with the Newspaper Guild of New York Page One Award in 1955, this book allowed Marguerite Yourcenar to affirm her writer status for good.

A sacralisation : the French Academy 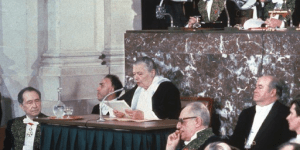 On the 6th of March 1980, Marguerite Yourcenar, succeeding the writer Roger Caillois, became the first woman to join the French Academy, although others before her had tried to get in. The French Academy was until then exclusive to men. She  would even say in her speech that:

“We must not pretend that in this French society, so infused of feminine influences, the Academy has been particularly misogynistic; it simply conformed itself to the usages that would put women on a pedestal, but not give them an access to a seat at the table.

Although the author had already obtained the Great Prize of literature of the French Academy in 1977 for her book Memoirs of Hadrien (1951), joining the institution wasn’t without hardships. Indeed, her admission provoked an absolute controversy among the academicians, who weren’t convinced at the idea of electing a woman. Despite this, the author was supported by Jean d’Ormesson, a writer, at the initiative of her application: he defended her admission within the Cupola. Marguerite Yourcenar’s exceptional talent was therefore recognised, and her election constituted absolute literary recognition. This election represented at the time an important step for women’s recognition in society. It also forged the path for other women’s nominations at the French Academy, such as Béatrix Beck and Danièle Sallaneve. She held her place there till her death,  the 17th of December 1987, at age 84.

A life imprinted by engaged literature

The latest part of her life would be divided between writing, isolated in Mount Desert Island, and long trips. She published in 1974 her autobiographical story named Dear Departed: A Memoir (original title: Souvenir pieux). She travelled a bit throughout the world with the young American director Jerry Wilson, her last secretary and partner whose photographs in colour illustrate La Voix des Choses (The voice of Things – 1987).

Marguerite Yourcenar died on the 17th of December 1987 in Bar Harbor. Her ashes were put in the Brookside cemetery in Somesville, one of the villages in Mount Desert. Her abundant correspondence was partially published in Lettre à ses amis et quelques autres (“Letters to her friends and others”) by Gallimard in 1995.

A Foundation named after Marguerite Yourcenar was created in 1982 and put under the aegis of the Fondation of France, following a wish formulated by the writer herself. In December 1980 she expressed the following on the RTL radio anthem, where she was invited after her entry at the French Academy: “If I were 20 years younger, I would create a natural reserve in Mont-Noir, where I spent a big part of my childhood.” Responding to this wish, the foundation, which has an ecological basis, aims to protect wild fauna and flora and contributed to the creation of a natural reserve in the Monts des Flandres.

From historical novels to autobiographical memoirs, the work of Marguerite Yourcenar is characterised firstly by the aesthetic elaboration of her language, the classic and refined style, and by the privilege given to narration. The writer’s thought is recognised by Renaissance’s humanism understood as universal curiosity. She would also participate in women’s modernisation thanks to her known bisexuality, her feminist convictions and her place in the Academic world until then reserved exclusively to men. The great writer thus participated in women’s elevation in the literary world and her writings continue to instigate passion to this day.