Coming onto March 8th, International Women’s Rights Day, let’s discover Mustang, the first film realised by Deniz Gamze Ergüven. A powerful movie, a tribute to femininity,  to sorority, and an ode to freedom.

Mustang, which premiered in 2015, addresses the status of women in Turkey. This fiction is inspired by experiences lived by the director, Deniz Gamze Ergüven, or members of her family. Her work is carried out by five main characters, five joyful and passionate sisters, full of dreams, and each of an astonishing beauty. They are interpreted by Güneş Nezihe şENSOY, İlayda Akdoğan, Tuğba Sunguğlu, Elit İşcan and Doğa Zeynep.

A brutal journey towards adulthood

The story begins at the beginning of the summer. In a remote village of Turkey, five sisters are coming back from school while playing with boys, triggering a scandal with unexpected consequences for them. They all dive into the sea, the girls climbing on the boys’ shoulders, carefree and having fun. However, for their grandmother and uncle, the incarnation of patriarchy and Turkish conservatism, who are in charge of the five young women, the vision is not the same. To have “rubbed” against boys, risking them to be “impure” and “soiled before marriage”, they gradually deprived the sisters of their freedom. The family home progressively becomes a prison, with housekeeping courses replacing the girl’s school time, while their weddings were being set up. The five sisters, animated by the same desire for freedom, get around the limits imposed on them. The spectator is presented with a  transition from the innocence of these young women to a brutal world where their future is already determined.

How to better define the sorority: five women, five sisters, closer than finger and thumb.. They share everything, until they are separated from each other due to unwanted marriages. Too beautiful. Too free. Too sensual. Too proud. Expressing a desire for rebellion against those conditions of confinement and control, some of them will suffer the consequences. This confinement is materialized under their eyes: the house, formerly full of life, is transformed into a prison, bars are put to the windows and grilles surround the property.

The condition of women in Turkey

Turkey was a modern country on the issue of women’s rights. For example, women have been able to vote since 1934 or, in 1983, a law authorized abortion until the tenth week of pregnancy. In addition, the Civil Code, adopted in 1926 proclaims monogamy, equal rights in the face of divorce, the sharing of parental authority, and equality in the legacy1.

However, since 2003 and the arrival of the AKP power (Adalt VE Kalkınma Parti, the Justice and Development Party), the party of Recep Tayyip Erdoğan, the Patriarchate regains field, through a speech wishing to strengthen the traditions, morality or religion. In 2012, Erdoğan describes abortion as “murder”2. Further, the government calls for households to have three children, in order to increase the population and allow Turkey to appear among the most powerful economies in the world, tending to further limit women’s condition to their sole role as a mother3. This is affirmed by the Government, on the 24th of November 2014, where Erdoğan, President of the Republic, delivered that a woman cannot be considered equal to a man. He relies on the Qur’an to back up his arguments: “Our religion has defined a place for women in society: maternity”. Women and men can not, in his opinion, be treated in the same way, “because it’s against human nature.”4

We also understand the extent of patriarchy through the statistics about sexist violence: in Turkey in 2014, 53% of murdered women were killed by their husband, and 17% by another family member. From 2002 to 2009, 4,063 women were murdered due to a “matter of honor”5.

Mustang is a film testifying about the current status of women in Turkish society, one that is divided between progressive and extremely conservative people, who gained influence in the recent years. This film raises questions about the relationship to sexuality in Turkey, about a  return of conservatism and how this country that was so ahead of time in these issues, now drowns in obscurantism, to the point of being against women’s right to dispose of their bodies.

A story told with poetry 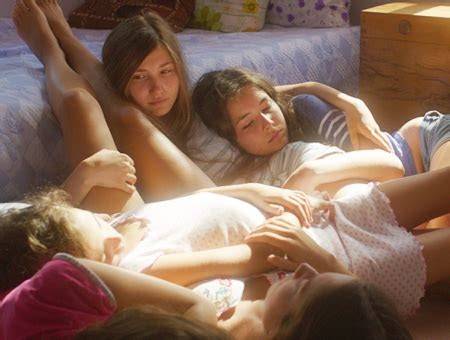 Despite the toughness of the words and its political importance, this film is captivating poetry. The sublime plans are smoothly placed, with the heroines’ long brown hair interweaved, thus evoking their union and solidarity in the face of adversity.

We cannot help but become fond of these young women, especially of Lale, the youngest of the sisters, initially withdrawn from her sisters. Through her, we see their lives change, one sister leaving after another. She ends up becoming the most revolted one.

In Mustang, Deniz Gamze Ergüven delicately films his actresses in their joys, sorrows and revolt. She plunges us into the heart of an endearing, moving, revolting story. She illustrates what it means to be a woman in today’s Turkey, her place in society being debated between progressive measures and patriarchal conservatism. Through their struggle, their beauty and youth exalte, and it is the struggle of all women that is expressed, going far beyond Turkish borders. 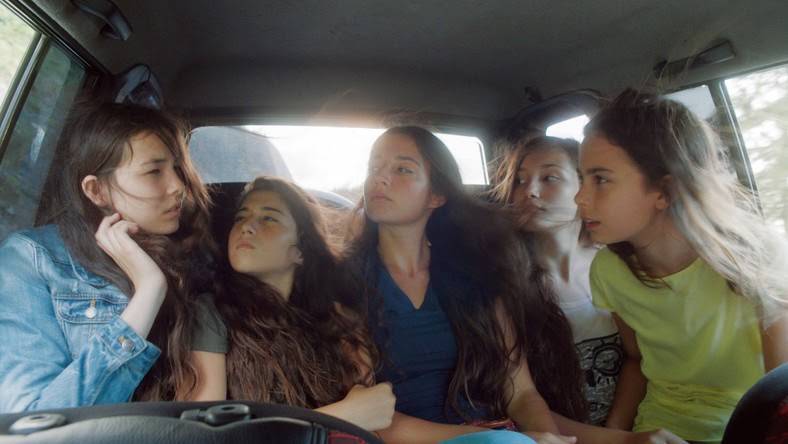 GROW fights for women’s freedoms and rights, and therefore we can only highly recommend this film. Throughout the film, we are caught in a flood of emotions, we smile, we sometimes laugh, we admire, we cry. We leave the room with shining eyes, smiling, upset, with the desire to live, to have fun and to believe in a world in which young girls will play freely with their friends when they leave school. Mustang is a fitting title; a beauty, a pride, and above all: freedom.