Every year, thousands of girls and boys are used as child soldiers. A reality that isn’t heard and listened enough, in which children all over the world grow up in an atmosphere of physical, psychological and sometimes even sexual violence. It is a real strategy of “dirty war” that is implemented by groups or armed forces from different countries. These young human beings, who are supposed to represent the future of their nation, are confronted with a bestial and warlike reality. It is no longer a question of keeping a child’s soul. In the 20 countries that still recruit child soldiers in the 21st century, it is no longer a question of being a child, or even a human being. It is a new form of modern slavery.

February 12 is the annual International Day Against the Use of Child Soldiers. This day has been observed since 2002, following the entry into force of the Optional Protocol to the Convention on the Rights of the Child on the involvement of children in armed conflict. It aims to raise awareness of the reality experienced by child soldiers, as well as to insist on the need to help them.

We can therefore consider that the use of child soldiers corresponds to a strategy of “dirty war”. Child soldiers are used for specific purposes: to win the war, to meet the sexual needs of soldiers, to increase the workforce, to train soldiers from an early age to have a malleable and responsive army. They are no longer seen as children, but rather as weapons. This systematic campaign of violence is then carried out by young people who will never see their parents again.

The use of child soldiers

It seems to us that the word “recruited” is naïve and inappropriate to reality. In reality, these children are rather recruited, forced, coerced to join these armed groups and sometimes even kidnapped. But generally speaking, they are used both physically and psychologically, becoming combatants, cooks, porters or messengers for government armed forces or rebel groups. However, it is not only for these roles that they are reclaimed. Many girls as well as boys are used for sexual purposes, for example.

“As a military initiation, child soldiers are forced to loot villages (sometimes their own), rape, torture, and kill under the threat of death by warlords” (Daxhelet and Brunet, 2013).

Child soldiers are mainly used for strategic and military purposes: planting bombs, digging trenches, pillaging villages, killing enemy forces, etc. Indeed, a young child will not be suspected of being a spy for rebel forces or a suicide bomber. Especially when Western forces intervene in African or Middle Eastern countries, they are unaware of such a disguised threat and may, for example, die under the bullets or bombs of child soldiers. As explained by Daxhelet and Brunet (2013), “these small soldiers that we call child soldiers are formidable fighters who demonstrate an inordinate aggressiveness”. They go on to describe their enlistment and their daily life: “as a military initiation, child soldiers are forced to plunder villages (sometimes their own), rape, torture, and kill under the threat of death from warlords. They then voluntarily repeat these gestures almost daily in their new life as soldiers”. They undergo what is called a process of ‘warlike socialization’ (Legrand and Weissman, 1995). It is a culture of violence that takes hold with the imposition of new values. They are both executioners and victims. 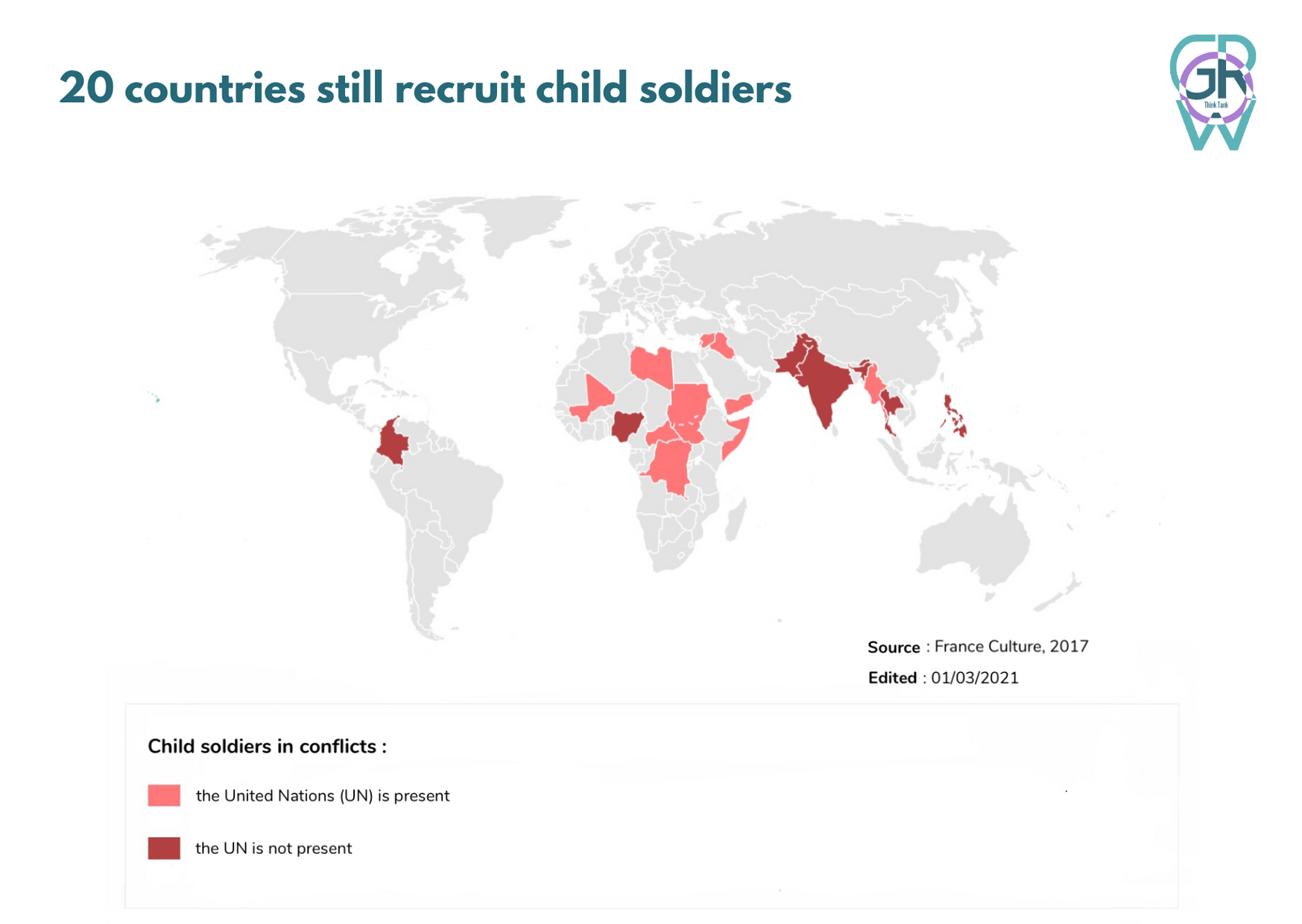 Huffington Post journalist Elise Boghossian (2019) explains that “between the combined presence of terrorist sleeper cells, jihadists exfiltrated from Syria and Shiite militias, children continue to be recruited. The reporter continues: ‘Left to their own devices to be tested in the streets, they build a semblance of organization which is similar to a pack, promote their codes and elect kings and intermediate leaders. These children in Syria have been transformed into veritable killing machines, some even call them “time bombs””. These gathering phenomena are similar to what Sageman (2000) formulated, about the radicalization of terrorists, being the Bunch of Guys theory. More precisely, the second stage of his theory – socialization – where we see the formation of cliques, intense friendships, with an intensity of beliefs “spiraling upwards”, the social ties between members are very strong with a cognitive process of group creation. These children, subjected to the law of the street and war, protect themselves as best they can by trying to create a kind of group consciousness.

In an interview for TV5 Monde in 2013, Leïla Zerrougui explains how children are recruited into Syrian armed groups, collateral damage of the Syrian conflict: “(…) this is not a conflict that violently forces children to join armed groups, as is the case elsewhere, in Sierra Leone, for example. But there is a psychological and social pressure and a sometimes unconscious adherence of children. Some have been recruited because their families, communities, parents, or adults are part of an armed group and are training children. There are also situations where children themselves join these armed groups because they are convinced or manipulated, or because they themselves, in the current context, consider it their duty to join an armed group to defend their community and play a military role.” She also explains that in some cases where families are against the recruitment of their children, armed groups exert such pressure that they are forced to give in. These Syrian children see their future stolen, either by force or from their “full-grained” family, which is in fact the result of a strong ideological and psychological manipulation.

The Syrian context is just one example among many, proving once again the damage of war on its civilian population and on a generation that is supposed to be the future of the country. These children do not have access to education, healthy food and a psychological environment adapted to their needs. They are abused, manipulated and even killed at the whim of their executioners. Measures to help them are therefore essential.

The country most affected by the recruitment of child soldiers is Syria. Indeed, there is much talk about the use of chemical weapons in the Syrian conflict, but very little about the use of these children within the ranks of different military and ideological groups.

Behind all this horror, Non-Governmental Organizations (NGOs), associations, governments as well as the UN and its various branches are trying to fight against this form of modern slavery. Thus, UNICEF is working hard to raise awareness about child soldiers: “Whether they witness conflicts or are forced to take part in them, these children and adolescents are first and foremost victims: reduced to servility, raped, sexually abused, exploited, wounded… Deprived of their rights and their childhood, they suffer the heavy physical and psychological consequences of this enlistment… when they are not killed” (UNICEF France, 2016).

According to UNICEF figures, it is estimated today that 10,000 children, some as young as 8 years old, are involved in no less than 15 armed conflicts around the world. It is therefore around three objectives that UNICEF focuses its energy on the fight against this trafficking: liberation, reintegration, and prevention. Liberation consists of freeing child soldiers, including during armed conflict, with the help of armed forces commanders and strong networking. Reintegration aims to help children to reintegrate into civilian life through access to education, vocational training and employment (for older children), psychosocial follow-up and strong assistance. Finally, prevention consists of helping vulnerable children (orphans and the poorest in particular), to prevent their path from crossing that of an armed militia one day. As explained in their report: “UNICEF also conducts programs to prevent recruitment, and promotes a legal framework that prohibits the recruitment and use of children in armed groups and forces, including through the ratification and implementation of the Optional Protocol to the International Convention on the Rights of the Child on the involvement of children in armed conflict, as well as adherence to the Paris Commitments which are accompanied by the Paris Principles.” Thus, since 1998, more than 100,000 children have been released and have received support for their reintegration into civilian life. Freeing them from this hell is not enough; we must also try to teach them how to live in society again and, with great hope and perseverance, give them back their childlike soul.

If some progress is noted, it is notably thanks to “the continued engagement of the United Nations with the parties to the conflict, around action plans and commitments (…) such as child protection laws, justice for victims and better access for child protection actors to release recruited children” (UN Info, 2020).

In 2019, more than 30 action plans, road maps, command orders, and other measures to protect children have been taken by parties to conflict with UN engagement, many of which have led to the separation of children from the ranks of armed groups (UN Info, 2020). But this cycle of violence can only truly end if children are followed through a process of thorough reintegration. Education, psychosocial support, health, and employment are key to successful reintegration for the UN. These prevention efforts have resulted in the “release or separation of more than 13,200 children from armed forces or armed groups” (UN Info, 2020) in 2019, a significant number, but is this enough?

Enhanced prevention efforts benefited children in 2019, resulting in the release or separation of more than 13,200 children from armed forces or armed groups. These efforts include regional engagement for peace, in accordance with Security Council resolution 2427 (2018), and the political will of the parties to engage in peace dialogue and declare cease-fires.

“Peace remains the most powerful means of reducing violations against children. I again echo the Secretary-General’s call for a global ceasefire, not only as part of the fight against the Covid-19 pandemic, but also beyond, because children in armed conflict and their families are in urgent need of peace – and the protection that comes with it”, said Virginia Gamba.

Directed by Edward Zwick, the film Blood Diamond retraces the journey of diamond trafficker Danny Archer (played by Leonardo DiCaprio), family father Solomon Vandy (played by Djimon Hounsou), and his son, Dia Vandy (played by Kagiso Kuypers). Solomon is enslaved in diamond mines while his son is kidnapped by armed rebel groups. The film shows Dia’s stressful psychological transformation. Ripped from his family at a very young age, he finds himself in a world of hatred and violence. He is taught to shoot, but also to kill. The objective of these armed groups is to transform these frail and innocent young boys into real killing machines. A moving and breathtaking film.

The film Beasts of No Nation, released in 2015 and directed by the American Cary Joji Fukunaga, also bears witness to the plight of child soldiers. It tells the story of a young West African who is forced to join a group of mercenary fighters and become a child soldier. It is an adaptation of the novel of the same name published in 2005 by the Nigerian Uzodinma Iweala. It is in Ghana that Agu’s story takes place, caught up in a civil war that he does not understand. Orphaned, he is caught up in the war, which transforms him into a child soldier under the orders of a charismatic and psychotic commander of a rebel army.

To quote the article:

DIDIER, C. (2021). Child soldiers, a warlike socialization through force and manipulation. Generation for Rights Over the World. growthinktank.org. [online] Mar. 2021.