In 1945, George Orwell wrote in Animal Farm: “If liberty means anything at all, it means the right to tell people what they do not want to hear”. This essential right to the proper functioning of democracy seems fundamental in our modern societies, even though it is now being questioned, for better or for worse.

The Charlie Hebdo attack marked a turning point in the freedom of expression of humorists, and especially for its impact on the public. Pierre Desproges said: “we can laugh at anything but not with everyone”. This thematic raises many stakes today and confronts freedom of expression, the keystone of democracy, to other fundamental rights’ infringements such as the respect of privacy and of human dignity.

The law already limits this possibility by measures prohibiting racist or antisemitic remarks. The incitement to hatred is condemned, as well as negationism. It is for that matter that Dieudonné was condemned multiple times (2007, 2008, 2011, 2013 …). His words caused great damage to the Jewish community and, more generally, to society. On top of that, we are now witnessing a thorough analysis of every comedian’s words, that can be interpreted as racist at the slightest joke. “We can’t laugh at anything anymore” claim notably some extreme right personalities, denouncing a phenomenon of “cancel culture” (cf. “Cancel culture” a rhetorical construction by Thibault Rabouin)

While it is necessary to raise awareness on topics on which humour should not infringe upon (in order to not fall into racism, homophobia, antisemitism, etc.), it is nevertheless necessary to be extremely vigilant as for the cursor to be placed relative to this limit. Indeed, it should not be forgotten that freedom of expression is one of democracy’s founding principles and allows its good functioning.  From then on, a limitation, regardless of its nature, constitutes  censorship, and we could fall into an authoritarian regime.

The weekly magazine Charlie Hebdo was established as the proper symbol of freedom of expression thanks to its caricatures and following the traumatic attacks of 2015. Freedom of expression was thus brandished against terrorist ideology as an untouchable symbol of the rule of law and democracy. However, Charlie Hebdo’s caricatures are questionable. Bruno Humbeeck, educational psychologist, considers that we can only laugh when a denunciation of a system is made and not of a person: “When you make a caricature of a system, you can push the mocking very, very far. It is what a lot of newspapers do, but when they miss their target, when they aim at a singular being, laughter gets far harder to generate”. Let’s think for example of the cover of the magazine in 2016, showing Stromae with lyrics of his song “Papaoutai” on which we can notice shredded body parts. This cover is questionable, to say the least, as the Belgian singer’s father was part of the Tutsi people in Rwanda and was killed during the genocide in 1994. 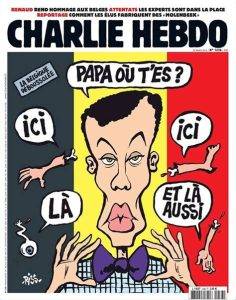 We can thus understand that some forms of freedom of expression can be shocking. Charlie Hebdo plays with this limit and aims to provoke in order to create reactions and debate.

However, while the limits set by the law for freedom of expression appeared as necessary and objective (condemning homophobia, racism, antisemitism, incitation to hatred), laughter still stays a personal experience, proper to each person and subjective. The issue of humour therefore comes up against the sensitivity of each individual, and this is why it is complex to find a solution that can please everyone. A perfect example of this would be the polemic with Norman, a French comedian, whose problematic jokes did not get the unanimity of his audience.

From then on, the evolution of society is also changing what we can laugh about, as expressed by Louise Richer, General and Pedagogical Director of the National School of Humour (Ecole nationale de l’humour): “humour is a matter of time and context”. Nonetheless, it is crucial to remember the role of the humorist and their true social responsibility. They must be aware of the effects they can cause in society, through their judgment, that has consequences, and sometimes tends to change norms and values.

To go further (sources in French)