Prison is everywhere, in our favourite TV series, in films, in literature – it is mentioned in the media, it seems to have always existed and to be necessary to guarantee our safety, punishment and justice. And yet, have you ever questioned the relevance of its existence? In the interest of locking up to do justice? I did. This questioning came to me in particular in the context of convictions of perpetrators of sexist and sexual violence, especially following the #MeToo wave and the liberation of victims’ voices. I wondered whether this was really a solution, whether it would allow victims to rebuild their lives and perpetrators to understand what they had done and therefore not to do it again.

It was these questions that led me to Pour Elles Toutes. Femmes contre la prison (“To all of them. Women against prison”) by Gwenola Ricordeau. In this book, the author talks about this current of thought, penal abolitionism, which questions the usefulness and effectiveness of the penal system and fights for its abolition. She does so in a very particular way, rarely, if ever, seen before, and which personally attracted me even more to this subject. She elaborates a link between abolitionism and feminism.

The book opens with a vibrant foreword, followed by an introduction, in which Gwenola Ricordeau confides her motivations for writing this book, as well as the audience to whom she dedicates it, namely women who have been confronted with the prison world. She manages to capture us from the very first pages with her precise and gentle way of writing, making us understand the issues at stake.

The first chapter of the book is devoted to abolitionism. The author introduces us to this thought in a pedagogical manner, making it accessible to all. She begins by setting out the basics of the subject, explaining what prison and the penal system are and how abolitionist thought developed, first in North America, then in Europe. At the end of this chapter, which exposes all the limitations of these institutions, it is difficult not to start questioning what was previously thought to be effective and irreplaceable.

In chapter five, Gwenola Ricordeau offers a parallel between penal abolitionism and feminism. Most feminists are, without knowing it, ‘prison feminists’, a phrase coined by Elizabeth Bernstein, which characterises feminists who support the penal system, the toughening and lengthening of sentences, without asking who is to be penalised. The condemnation of street harassment is a prime example. Indeed, by focusing on this form of harassment, it is a question of condemning men whom the victims do not know, as the aggression occurs in the street, on an ad hoc basis, whereas most sexist and sexual aggressors are people whom the victims know. Moreover, this condemnation of “sexist offences” is all the more questionable given that the men targeted are those who occupy the public space, whose profiles tend to be young, racialised, working-class men. Gwenola Ricordeau outlines the various arguments linking criminal abolitionism and feminism and explains that feminists have an essential role to play in criminal abolitionism.

After discovering abolitionism, and at this stage of the reading, being full of doubts and totally questioning our relationship with the penal system, the author suggests in chapter six ways to “emancipate ourselves from the penal system and build autonomy”. Gwenola Ricordeau mentions three of them: an amending justice, restorative justice and transformative justice. It focuses more on the latter. Transformative justice is about ‘community responsibility’; a collective process. Indeed, it is not only the victim and the perpetrator who are involved in the process, since when a ‘harm’ occurs, it is the whole community that has failed, so the community has a place in the resolution. For abolitionists, therefore, there is no question of replacing prison with an equivalent institution: the project is broader and implies a change in society as a whole.

Since no one talks about it better than the author herself, many interviews with Gwenola Ricordeau are available online. She has a dedicated episode of the podcast Lauren Bastide’s Powder (Episode 89 – Feminist Justice with Gwenola Ricordeau, 25 February 2021), available on all listening platforms ( Spotify link : https://open.spotify.com/episode/0ogPxBueKn3c7N6w7FU7SI?si=ZvwChKJoT_CQx4_ENBvyKQ).

Gwenola Ricordeau is a sociologist and assistant professor of criminal justice at California State University, Chico. Her work focuses on prisoners’ loved ones, gender and sexuality in prison. She holds and advocates an abolitionist and feminist position. 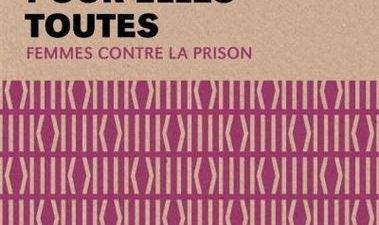